Ant-Man and the Wasp - A Movie Review 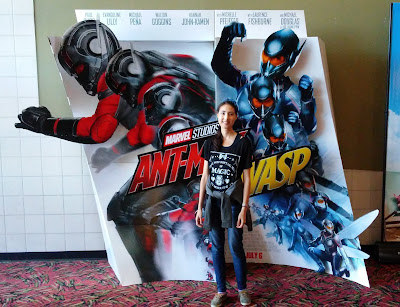 Having missed out on the first installment of Ant-Man, I was intrigued and definitely looking forward to watching the second installment, Ant-Man and The Wasp. After all, it's summer and I needed something epic to watch. That, and I heard that the first film was pretty lighthearted and funny. Funny is good, especially after watching Avengers: Infinity War a couple of months ago. Other than that, I didn't really know what to expect.

Turns out, it's a wonderful heartwarming film, all about family and the relationship between fathers and daughters. I loved Paul Rudd as Ant-Man and his charismatic on screen presence. Evangeline Lily as The Wasp is not only beautiful but a super genius scientist as well. I especially enjoyed the integration of science with the art of close up magic. All the "tricks" were so clever and the shrinking special effects were amazing to watch.

I also appreciated the character of Ghost - yes, she's a villain but the film delves into why she is the way she is. It makes you think about people in general and what makes them do good or bad things. 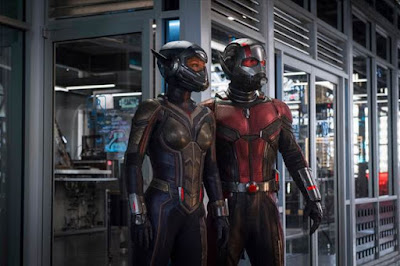 Overall, the film is great entertainment and packed with charm and humor. Two thumbs up!
Ant-Man and The Wasp arrives in theaters Friday, July 6th.

Who knew that there would be so many Marvel Universe movies leading up to this one? Honestly, I had lost track of where we were in the storyline and was a little apprehensive going into this one. I was a little worried about being completely lost and how they were going to bring all the superheroes together and have them mesh together nicely in one movie. 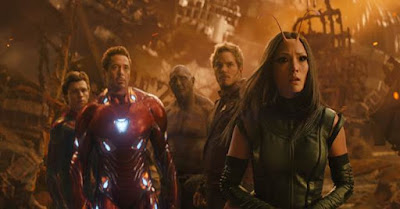 Turns out, I needn't have worried. The story picks up with Thanos, the villain, trying to collect all six powerful stones (introduced in previous movies), so that he can bring balance to the universe. And the way he plans to do that is by destroying half the population. Cue the Avengers to stop this maniac!

The classic Marvel humor is ever present in the film, as well as plenty of awesome action and characters. Lots of characters. I loved seeing The Avengers meet the Guardians of the Galaxy for the first time. It's also fun to see so many different personalities interact with each other, which makes for some pretty epic battles. Although the film does tend to drag on after a while and there are a few heartbreaking scenes, you'll definitely want to stay for the extra scene after the credits!

Have you seen Avengers: Infinity War? What did you think?
Posted by Marissa at 10:21 PM No comments:

Now Playing - A Beauty of a Film

Disney's Beauty and the Beast has always been my favorite movies and definitely my favorite musical soundtrack. I was so excited to go to the new live action version of the film to see if it lived up the animated one from my childhood. And it does! First, some shots of Belle: 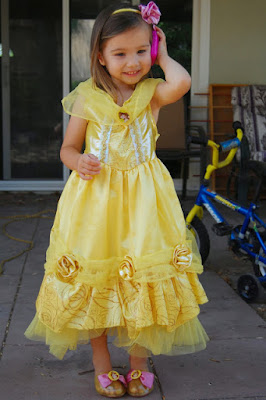 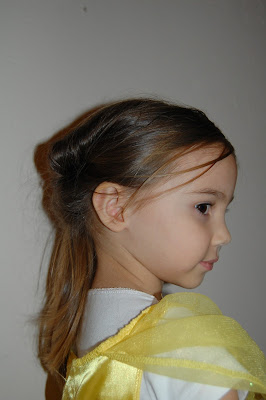 Wait a minute - that's Pinga, not Belle. But Emma Watson gives a splendid performance as Beauty, and I love the added twist of making her the inventor alongside her father. Her strong, independent portrayal of the character felt fresh and fitting. The film follows the original animated version pretty closely, with a few added surprises, that feel natural and blend into the story very well. The songs did not disappoint either! The whole cast is delightful in the musical numbers, from their costumes to their voices and is definitely a highlight. The cinematography is incredible and the scenery in France looks absolutely gorgeous. This tale as old as time certainly stands up to the test of time, and in some ways surpasses it! Two thumbs up! 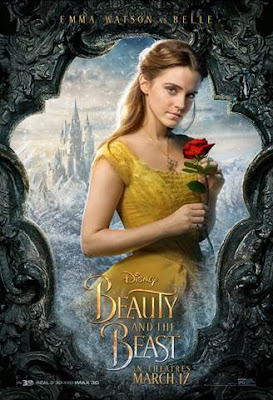 Ever since we watched The LEGO Movie, the kids have been even more obsessed with Legos than they usually are. We really didn't think anything could get more awesome, until we saw The LEGO Batman movie! Batman is just so cool, we can't stand it. The movie is a non-stop, action packed classic that's filled with cheesy jokes, tributes to past appearances, and stunning visuals.

The story is your basic, Batman vs. Joker and his gang of super villains feat. Throw in the new police commissioner Barbara Gordon, Alfred the butler and Dick Grayson the orphan boy, and you've got a cast of colorful characters which can't be beat.

But underneath all the silly jokes, playful dialogue, and awesome ridiculous music, is a movie that has real heart. I actually saw a lot of myself in this film! Batman is a lonely man, whether he wants to admit it or not, and is forced to accept that working as a team is the only way to defeat the joker. And somewhere along the way, maybe he'll discover his true friends (and enemies!), and perhaps have the family he's been longing for all along. It's really about finding out who you truly are.

Both kids and adults will be entertained by this movie. There are lots of laugh out loud moments and a few sentimental ones as well. It is absolutley awesome and in the words of Batman, "that was fun!"

Now to try and find all the Lego Batman minifigs the kids are begging for... 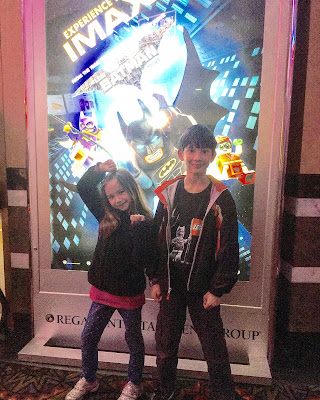 Posted by Marissa at 2:34 PM No comments:

#3DSKidforaDay at the Nintendo Gaming Lounge

San Diego Comic-Con gets crazier every year, with bigger displays, more people and a myriad of outside events for the whole family. But the highlight for my kids is definitely visiting the Nintendo Gaming Lounge!

After a full day of experiencing as much of Comic-Con as we could handle, the kids finally had a chance to experience the Play Nintendo Tour through a special sneak peak of the new Nintendo 3DS XL. 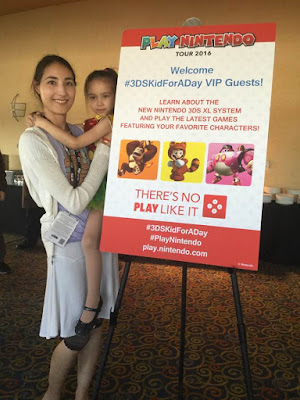 We were treated to a much needed, delicious pizza dinner and then headed off to the lounge to play some games! 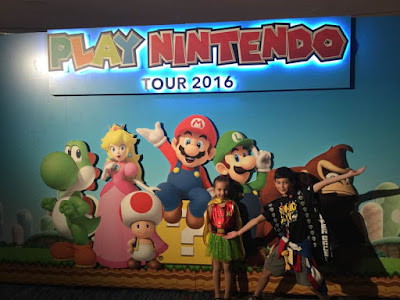 Beloved classic games like Super Mario were a big hit - just look at that face! 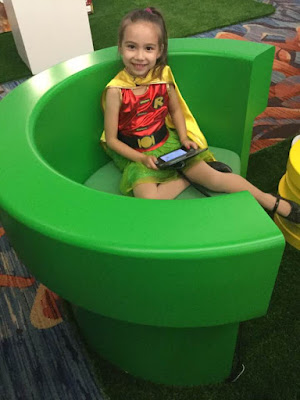 Bean was selected to take part in a super fun tournament for a chance to win prizes. 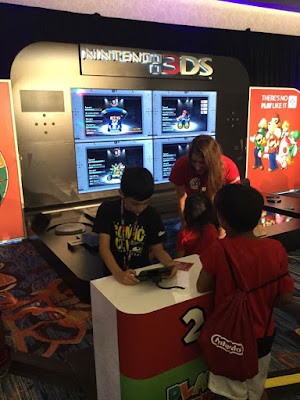 The lounge was decorated with awesome displays. Bean loved the giant Kirby and Pokemon ball. Luigi himself even made an appearance! 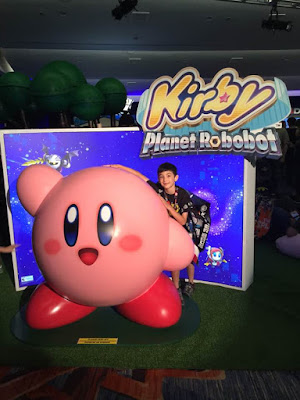 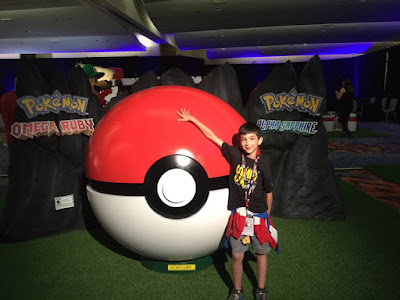 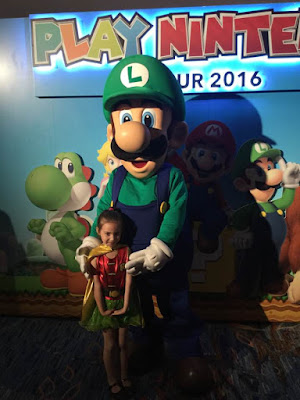 Pinga discovered a new (to her) show and game called Yo-Kai Watch. She spent a good part of the evening chilling and watching the show. Both kids are now kinda obsessed. I have to say that the physical watch that you can buy in stores sounds pretty cool! 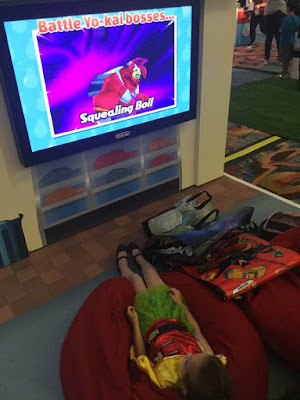 She also found a girlie game that she loved called Style Savvy: Fashion Forward, which is launching on August 19th. How cute is this setup with the vanity?! 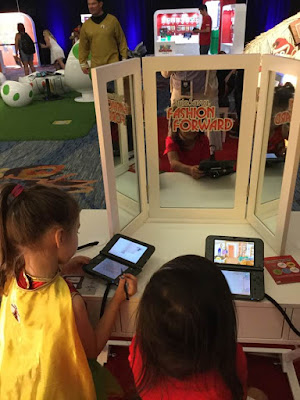 You can experience all the fun of the Nintendo lounge too, for one more day. Come on Sunday, July 24th to the Marriott Marquis Marina hotel and experience the fun from 10 a.m. - 5 p.m. Happy gaming!

Posted by Marissa at 6:44 PM No comments:

In Theaters Now - The BFG

As a child, my absolute favorite author was Roald Dahl. I pored over his books, and read every title multiple times. His way of storytelling fascinated me and I strived (and still do!) to write books that would leave a touch of magic and a sprinkle of inspiration in every reader's mind.

Out of all the books I read, the one I loved best of all was The BFG. It had everything - ghastly giants, a poor orphan, the Queen of England, dream blowing, and of course, the Big Friendly Giant. Everything about it was perfect, and so I was curious to see how it would translate to the big screen. 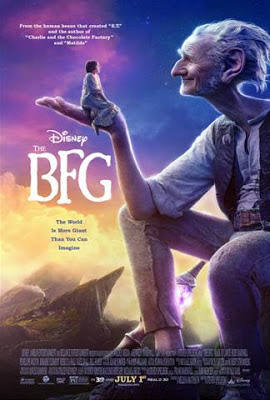 I was not disappointed. Steven Spielberg directs this imaginative story of young Sophie and the Giant who introduces her to the wonders and perils of Giant Country. The BFG, while a giant himself, is a Big Friendly Giant and nothing like the other inhabitants of Giant Country. The film captures the otherworldly feel of the book spectacularly, and with some pretty awesome special effects. I loved Sophie's spunk, and the gentle BFG with the great sense of humor. The dream catching sequences were absolutely gorgeous and the man-eating giants downright terrifying. The final scenes with the Queen of England are endearing and brought back all the feelings I had as a child reading the book.

A captivating movie with a whirlwind of emotions, both kids and adults will love it!

Posted by Marissa at 1:57 PM No comments:

Marissa
Hi, I'm Marissa! I'm a half Asian, all-Canadian, former ballerina, living in San Diego with my husband, six year old son, and two year old girl. I'm loving life as a mom and all the "sparkles" that come with the job! Email me: mama.sparkles AT yahoo DOT com 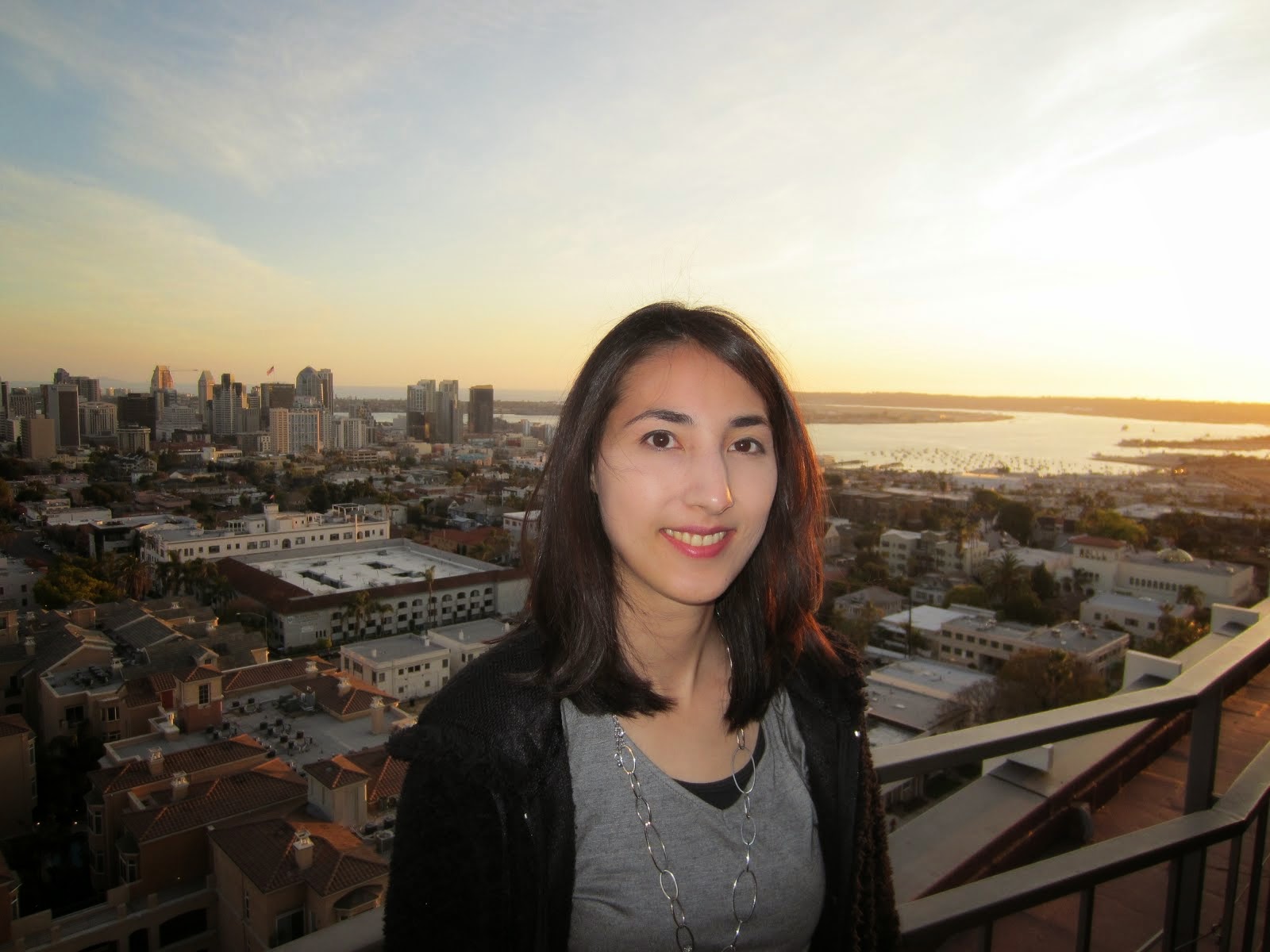 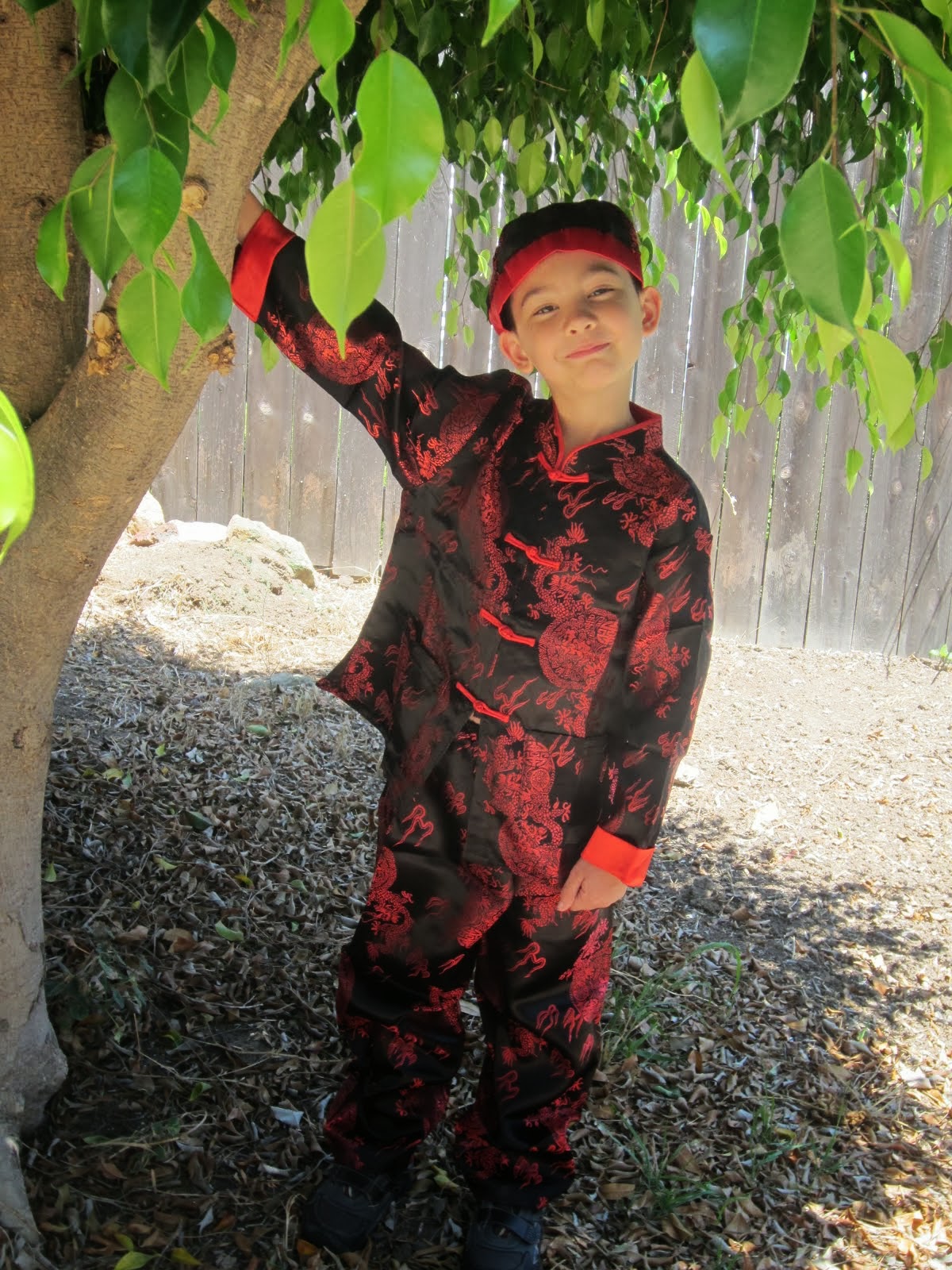 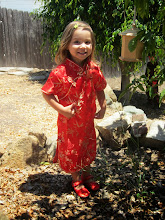